BASH has arrived for all in Windows 10

No no, the latest update to Windows 10 will not make you want to bash your head against a brick wall; Update 1607, otherwise known as Anniversary Update 1 (code name Redstone 1) brings a very surprising feature to the Windows landscape; Linux on Windows.

While the ability to run Linux within a Windows environment is nothing new courtesy of the various flavours of virtualisation technology out there, Microsoft & Canonical’s new way is something similar to the Windows on Windows platform that allows x86 applications to run on the now dominate x64 architecture. Entitled, Windows Subsystem for Linux; WSL for short, will allow you to run the same applications you know and love from Linux under BASH (Bourne Again SHell) straight in Windows. No virtualization, no recompiling, no Docker containers; this subsystem is a real time translator of Linux system calls to Windows system calls.

How do I get BASH?

And that is all she wrote. You now have a Windows Subsystem for Linux running on Windows 10 (ugh, that name needs reworking). The environment can be found by searching for bash in your Start Menu, like so 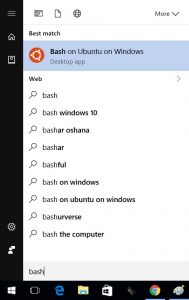 and you will launch into your very own, Linux Kernel v3.4 running space. Bash away